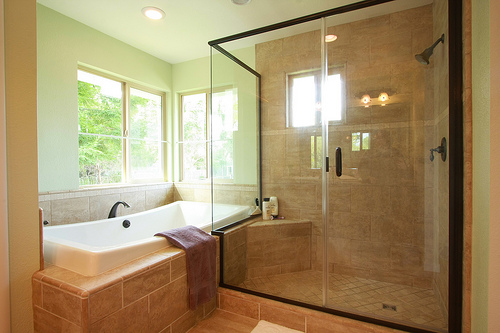 The first showers were something nature has to offer.  Ancient tribal people would cleanse themselves by standing under falling water. This included waterfalls and rain.

Showering and bathing became more commonplace when civilization began to progress. The ancient Egyptians would have jugs of water poured over hem by servants.

The ancient Greeks invented the precursor the modern showers. They used aqueducts and sewerage systems to pump water into communal shower rooms. Water spouts on the sides of fountains were also used as outdoor showers.

Romans continued this bathing trend by creating their famous bathhouses. These were huge communal baths where large numbers of people would go to wash themselves.

Good hygiene became a religious taboo and a sign of vanity with the rise of Christianity. Cleanliness became popular again after a third of Europe died from the Black Death in the 14th century. The health benefits began to be more widely recognized.

William Feetham was a stove maker from Ludgate Hill in London. He was granted the first patent for a shower in 1767. Early showers had a hand pump to pump water from a storage container. Showers became more popular than baths because they used less water.

Showers continued to grow in popularity after the health benefits were recognized. The first designer was created in the early 19th century. It was named The English Regency.  The shower was invented anonymously. It consisted of a metal frame painted to look like bamboo. A hand pump pushed water through a tank.

In 1850 indoor plumbing was invented. Free-standing showers could be connected to a running water source.

In the 20th century, tankless water heaters became popular for their ability to generate an instant supply of hot water without relying on a hot water tank.

In the late 1990s, a rough estimate of 62% of people in developed countries had showers in their households.

In 2001, a UK company by the name of Aqualisa, pioneered digital showers. This brought a new era to the world of showering. It allows the user more control over how the shower operates.