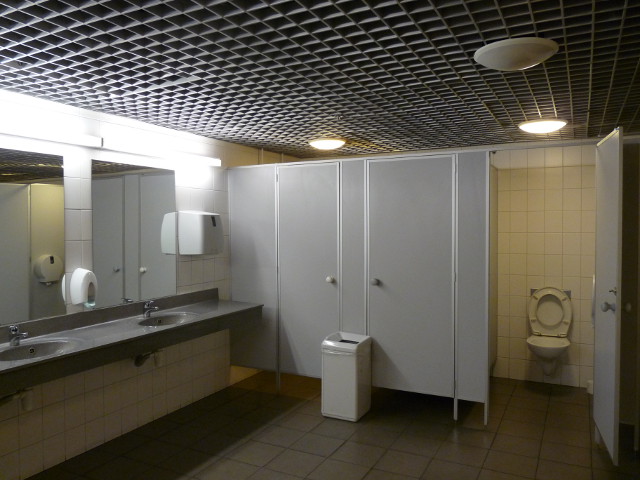 Public bathrooms were commonly used in Ancient Rome and often very near or an addition as part of public baths. During the Middle Ages, public toilets became uncommon. Only few were in use in Frankfurt in 1348, London in 1383, and in Basel in 1455.

In the early 19th century, large cities in Europe started installing public toilets: first in Paris, than in Berlin in 1820 and in London in 1851.

Public bathrooms are rooms or small buildings containing one or more toilets. It possibly has some urinals which is available for use by the general public. Public bathrooms are generally separated by gender into male and female facilities. Some of these can be unisex, especially the smaller or single occupancy types. Public bathrooms have begun to incorporate accessible toilets and features to cater for people with disabilities over recent years.

Public bathrooms may be unattended or be staffed by a cleaner, or attendant, provided by the local municipality or the owner of the larger building. Sometimes the attendant or cleaner will have a supply closet next or very near to the bathroom, where they can be found. In many cultures, it is customary to tip the attendant. Other public bathrooms may actually charge a small fee for entrance, sometimes through use of a coin operated turnstile. These bathrooms are generally more secure and cleaner because an individual in only allowed entry after paying the fee. Some luxury hotels will have a bathroom attendant stationed within the bathroom to clean it after each user has left.

They are typically found in train stations, schools, bars, restaurants, nightclubs or filling stations. Long distance transport vehicles such as buses or aircraft feature a built-in lavatory. Portable toilets are referred to as public bathrooms when they are used at festivals or major events.